Moby Dick is the feminized cannabis strain that has put Dinafem Seeds on the world cannabis map. Its super powerful effect, brutal production and ease of cultivation have made it a cult genetics. Hybrid of dominance sativa, it is not very demanding in care, but it is very demanding in its rations of light and nutrients. If you are amazed by the Haze smell, you lose the powerful cannabis that borders on psychedelia and you want abundant harvests, dare to try our killer whale.

Moby Dick is a hybrid of sativa dominance. The fruit of a cross between a White Widow and a Haze, it is a plant shaped like a Christmas tree. His sativa genes lead him to stretch a lot, both horizontally and vertically. And it is a large plant, whose internodes are wide, not in vain the legendary whale gives it its name. Its leaves do not respond to any 100% genotype: half wide, half narrow. Remember that it is 60% sativa and 40% indica. It is a medium / high, long and wide marijuana plant. But the most characteristic feature is its central tail: the main baton more than lives up to its name. It is, frankly, something worthy of admiration.

Moby Dick offers a simply brutal production. In all the branches we will find large compact buds. As usual, those who receive the most light will be the most generous. They are all downright impressive, but the jewel in the crown is the central tail. A long and wide truncheon that will delight any grower. As we have mentioned in cultivation, it is a plant that eats a lot, but its size and the flowers it gives more than compensate for this diet rich in nutrients and abundant light.

Moby Dick has a very, very strong smell. Those who have grown it define it as a "very intense aroma that mixes lemon, spices, incense, with an important touch of Haze and cedar." When we ask its creator, the legendary breeder King Kush, what his famous whale smells like he usually says "an old church bench". Each grower will find different nuances in our whale but they all agree on the same: Moby Dick has a very strong and penetrating aroma, in which the Haze notes stand out compared to the others.

Moby Dick and its effect ... There have been those who have compared the sensation that this variety causes to the flipping of the mythical whale of Herman Melville. And it is a very powerful sativa effect, extremely psychoactive, bordering on psychedelia, and also narcotic. Consuming this variety with an empty fridge is a mistake to avoid, because it whets your appetite like no other substance. The sensations have psychedelic, narcotic and long-lasting overtones.

Moby Dick is a plant of easy cultivation, but voracious. In other words, it does not present too many complications because it is a very robust and resistant plant to humidity, but it needs many resources. Given its size and quality it requires a lot of space, a lot of water, abundant light and a good amount of nutrients. If you grow it indoors, to get an idea, in that square meter where you grow four White Widows, only two Moby Dick will enter. So consider how much space you have for the whale before turning it into bloom. Because from that moment on, it will stretch like a giant.

In fact, we recommend not having it in vegetative growth for more than three weeks, unless you want to cultivate a monster. The advantage, even when it has many branches and the flowers of the same ones are very heavy, is that as it is very robust, it perfectly supports the weight and you will not need tutors to support the buds. 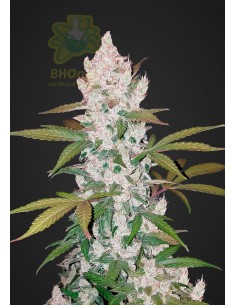